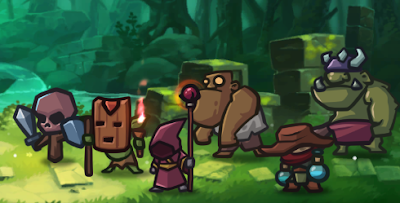 That skull on a stick is a decoy, which must be attacked first. The alchemist gifts a turn to each enemy, so can be a real nuisance. I'll decide later on what the tiki and mage casters will do. The goblin shaman (not shown) already attacks with fire, so at least one of these will heal instead.
Posted by Elliot at Friday, June 28, 2019 No comments:

Every now and then I download a dozen games for my phone and give each a try. One that has stuck is called Bravium, a freemium (on mobile) side-scrolling game with steady progression set in fantasy/viking setting. Weapons are unlocked by completing new stages, but are purchased within each battle with temporary currency. A rather ingenious design decision because this provides two layers of progression: one on the larger scale where weapons are unlocked, and one on the smaller scale for each battle.


I am not affiliated with this game, or the team behind it. This is not necessarily a game that I would include on my top 10 list of favorites, but it is definitely one that I am infatuated by.

I could see myself taking design elements from Bravium and combining it with Zombie Guard to create another hit.
Posted by Elliot at Tuesday, June 25, 2019 No comments: 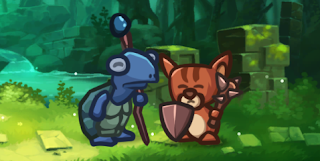 I'm very satisfied with how the game feels, especially compared to Match 3 Fantasy. This is an entirely new game built on all that tech and content by changing the flawed design.
Posted by Elliot at Saturday, June 22, 2019 No comments:

All the trinkets for passive bonuses are finished. Also about a dozen prearranged battles. 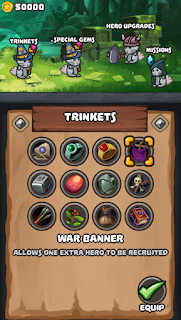 These are unlocked items that can be equipped for small bonuses.

In other words, the first half-hour of the game is playable. I just need to add a revised interactive tutorial, new icon, and a bunch of new creatures and weapons. I noticed many sprites being blurry, so I have been adjusting the texture import settings.

Only near the very end will I begin to remove all unnecessary assets to reduce the file size. The compressed package for Android is about 50mb, which is as large as I want it to be. In a Unity project, anything inside the Resource folder is included in the file, so I will eventually need to trim the excess.

I want to add at least two new animal heroes. The art and animation will be a good break between the long programming sessions.
Posted by Elliot at Tuesday, June 11, 2019 No comments:

I have been experimenting with a lot of post-process effects. These are effects applied to the entire screen, or just a section of it. Given a shader script file, all you gotta do is drag-and-drop it onto the camera object in the scene. Easy.

Multiple effects can be applied, arranged in different orders. Vintage film, oil paint, blurs, rain, so many to choose from. 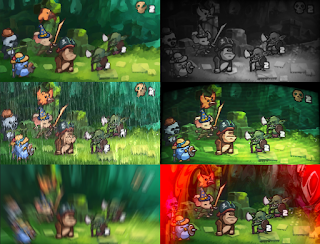 This pack came with over 300 effects. Some designers are true visionaries who know exactly what they want, but I prefer to go in reverse... I start with resources, and then playfully figure out how to utilize them.

Just like when I create a trailer video for this game, I will edit footage around a specific audio track, rather than find an audio track that best matches the video.
Posted by Elliot at Saturday, June 01, 2019 No comments: