One of the most valid reasons to take a break from a big game project is to endure a game jam, ranging from a day to a week. The theme for Ludum Dare 36 was announced as "Ancient Technology", which received almost two thousand entries.

I just so happened to have this weekend available (and the house to myself). I put my unannounced project to the side and eagerly waited on Twitter for the announcement of the theme. I decided to write the game in LiveScript using the Phaser engine, and Clip Studio Paint for the art.

So, here it is! Titled Vitruvian Man Goes To Heaven. The source code is available as well. The Vitruvian Man is a concept sketched by Leonardo Da Vinci of the ideal proportions of the human figure. The proportions in my reproduction are.. a tad less ideal. I incorporated many other reproductions of his other sketched inventions, such as the catapult, wings, parachute, tank, and helicopter. Michelangelo and the Sistine Chapel make an appearance as well. 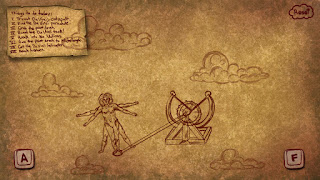 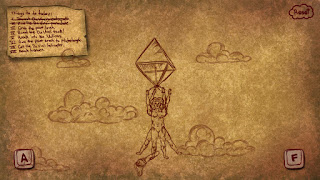 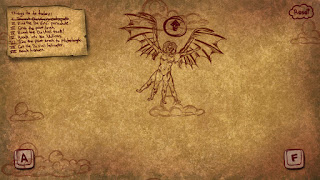 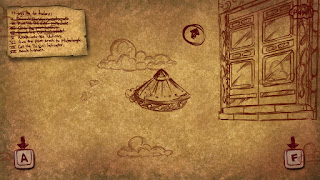 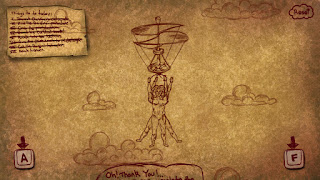 The overall development was approached differently compared to how I normally do things. Normally I would create a prototype with placeholder art, focusing on design and programming first. This time I did not write any code until the second day, feeling fairly confident once I had all the assets. I did the art first because I could move the pieces around the canvas to help me figure out the details of the mechanics.

Sometimes it is easier just to create all the art, and then figure out how to utilize it. This approach has not always worked out for me. This time it did.

Here is a time lapse video that shows the overall process endured in the past few days.

I got to experiment with a new art style that I had been meaning to attempt.

The programming went smoothly. The game is playable in browsers, including my Android tablet and phone! It just simply works, dammit!.. Thank goodness for Web standards like HTML5. Oh, how I would much prefer to invest half my game jam hours attempting to build and digitally sign an iOS app with X-code while iTunes crashes a dozen times and uses half my RAM. All, only to find after 10 days, the app is rejected because it does not support some insane retina resolution display for newer iPads. Meanwhile iTunes uses the half of the RAM. And crashes. 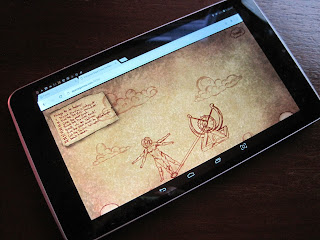 I was a bit relaxed early in the jam. I even had time to take some of my red cayennes to the Shrewsbury flower show in the morning, which evidently won first prize in its category. 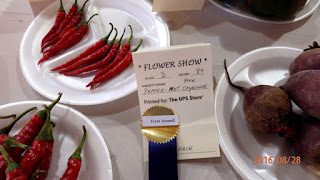 The photo and news of the blue ribbon came right when I submitted my game jam entry. Frankly, I was satisfied just being done with the game jam, so this was icing on the cake.

The game itself is not very fun and even a bit creepy. It is way too linear without any usage of my specialty in game design: upgrades and progression. There is nothing to upgrade, so it is purely skill oriented. Initially the game had currency and a shop, but I had to drop it due to time constraints.

Me. During the game jam. I felt terrible during the second day of the competition. I ended up opting for the extra day, which makes my entry a 72 hour "jam" entry instead. Game jams can be really taxing on a person's body and mind, even with sufficient sleep because it may not be as restful, as the mind races under the pressure. The late night gin martini and habanero burrito must have acted as the catalyst leading up to my illness. It was delicious though. Likewise with the dark coffee the following morning. Okay, so hindsight is twenty twenty...
Posted by Elliot at Tuesday, August 30, 2016 1 comment: