I have noticed a consistent demand for wall-based zombie defense games, especially after the release of Zombie Situation a year ago. For example, these three games:


I am very certain that all three of these used Zombie Situation as a piece of inspiration, based on the design, art, and even the audio in the bottom two apps. I find it to be flattering. I used existing games as inspirational material during the development of Zombie Situation as well, so my game can be seen as an intermediate branch. It is so fascinating to experience firsthand the evolution behind game development.

The bottom two apps are doing quite well for themselves, based on the number of downloads. I could see myself making something similar, but I am getting really tired of developing wall-based defense games. The luxury of being a self-employed developer not only consists of pursuing attractive opportunities, but choosing not to pursue them as well. It would be my fourth one of the genre, followed by Zombie Situation and the Defend Your Nuts series. My assumption was proven correct when I sat down to prototype one for my Android device: 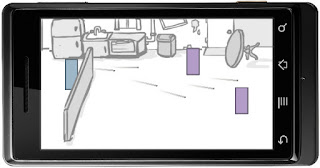 As a developer, the popularity behind this type of game is insufficiently motivating. The foundation is nothing to me, so development would be dull. So, I brainstormed exclusively through art, resulting in this: 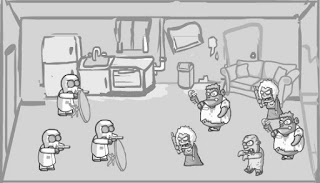 Which transitioned into a tactical turn-based hexagon concept, similar to Dragon Age Journeys: 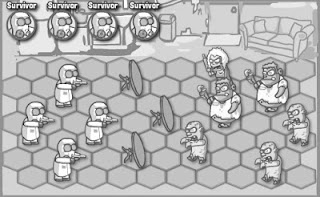 I'm intrigued. It welcomes strategies on both a micro and macro level. It can feature ridiculous melee weapons like frying pans and golf clubs. Meanwhile I have been reading Apocalypse Z while watching zombie movies and shows such as Dawn of the Dead and The Walking Dead, so I can't help but gather ideas rapidly. I have yet to sleep on this particular concept, so we will see what the future holds.
Posted by Elliot at Friday, May 24, 2013 No comments:

At last! My current game for iOS and Android has reached beta status. This project has evolved tremendously over the past month. Now I can finally play it and make adjustments here and there. It has a very similar feel as many of my Flash games for the web.

Meanwhile, Goat Mechanic has been sitting in beta ever since I started this project. It looks like both will be released at the same time near the end of this month.

I am using an older version of Corona to build my apps for iOS. Why? Well, my Mac Mini is capped at Snow Leopard OSX rather than the latest Mountain Lion version. Mountain Lion is now mandatory for the latest versions of Corona, because of changes in Apple's SDKs and possibly others reasons.

It is really frustrating to work with Apple because the company leverages software updates to phase out hardware rapidly, forcing customers to upgrade everything. Worse, it took me hours to figure out it was an operating system issue. It is not fun to stare at vague compiler errors all day, regarding infamous entitlements and other plist garbage. It is especially not fun to realize that my Mac Mini is becoming a paperweight, as I only use it to build iOS apps.
Posted by Elliot at Monday, May 20, 2013 No comments: