At last I can announce that I am submitting the already finished tower-defense game, titled "The King's Path" to the Apple app store today! This means it will be going through a review process for approval, so may be available in one week!

It took some time to transition from an individual membership to company status, and I was never in a rush in the first place. In fact, I am spending the day making some final touches and even polishing and balancing some of the features - which is far easier now that I have taken a break from it. I am also adding achievement support for OpenFeint, and a better ending. 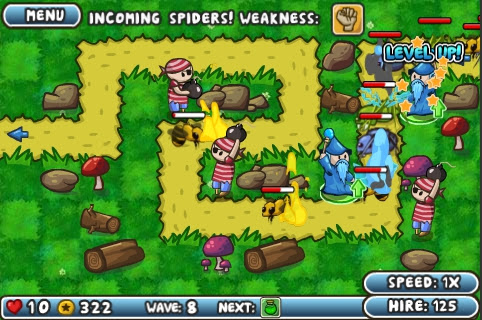 I will be announcing its release soon...
What else is new? I finally got around to releasing Defend Your Nuts on Kongregate, which is currently on the front page, so that's awesome. It has been ranked well on AddictingGames, a more casual site that owns a non-exclusive license for the game. I had to go through Android's legal department to get two versions removed from their app store because the game is intended to be free for the public, not 99 cents.
Also my current Flash and soon to be ported mobile game (see previous entries) went through some very preliminary play-testing. Only three people actually tested it for me, but each person can represent tens of millions of players on the Internet. I concluded that although it is fun, it targets such a narrow audience so I am changing it again. 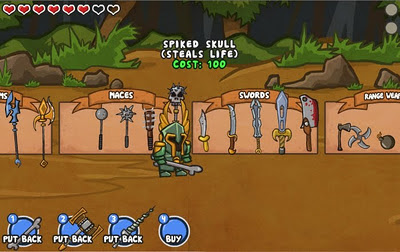 I am still confident that I can finish this entire project by the end of the year. Already progress is going smoothly. This time, it is a 2D game with left and right controls (no 2.5D depth) and will play as a beat 'em up defense game. Between each round, the player can buy new weapons and items from a selection of 30, and then slay enemies that come from the left and right sides of the screen.
Some weapons have special abilities, like stealing life hearts, stunning enemies temporarily, freezing them, catching them on fire, etc. Part of the inspiration comes from the dueling scene in the classic film Crouching Tiger Hidden Dragon, where (avoiding spoilers) one opponent has to keep getting a new weapon because they break easily. The weapons in my game will probably break by limited durability in order to force the player to conserve weapons and buy new ones. It would be uneventful if they could just rush and get the best one for the rest of the battles.
Posted by Elliot at Sunday, November 20, 2011 2 comments:

The project is nearing the end! I expect to reach beta by next week, but I anticipate that there will be a tremendous need to revise features and heroes once I gather some feedback.
All the primary features are finished, including the team layout for hiring and upgrading heroes. 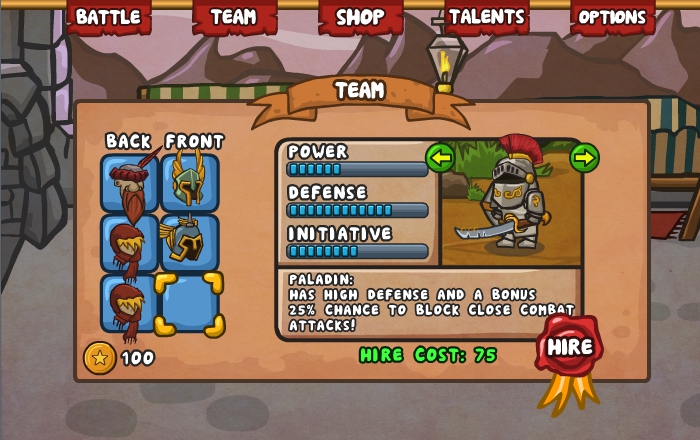 And I decided against some kind of treasure map or aerial view, in favor of a simple network of nodes. 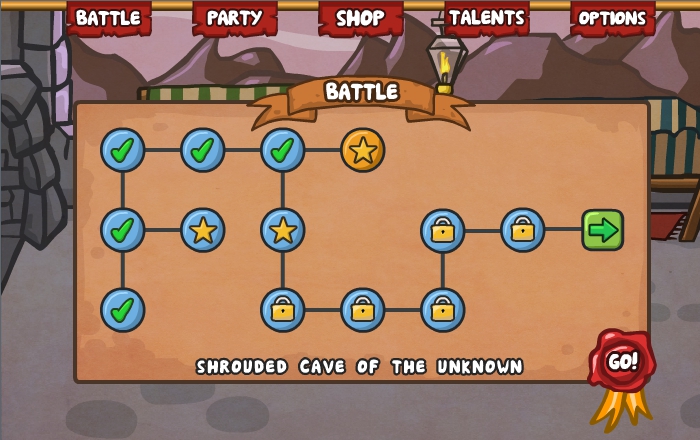 Here is a screenshot of a battle taking place. As a reminder, it is a turn-based game similar to the Disciples series. There are interesting items including grave dust to summon death, a glowing orb that blinds an enemy, and a potion of invisibility that allows a hero to be invulnerable for a couple turns.
(Ignore those two buttons in the top left corner - I use them for debugging). 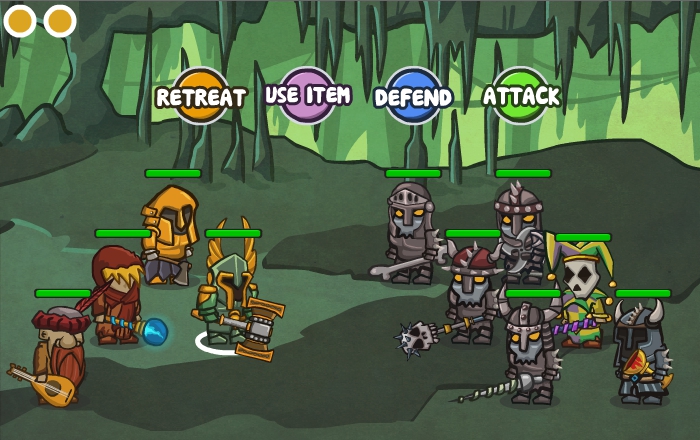 Already I am thinking about what to work on next.. I plan to revisit Pigs Can Fly to make a worthwhile sequel. Even better, I plan to hire contractors to help me create levels, leaving me to just polish and redo all the art. It may or may not may ship with a level editor because it all depends on how things go.
Posted by Elliot at Thursday, November 10, 2011 4 comments:

Progress has really picked up in the past couple weeks. All 18 of the warriors (including spell casters) for the three races are functional and almost all of the interface screens are finished (battle selection, shop, talents, etc).
I would say that this is shaping up to be roughly the same amount of work as the previous game, but on the contrary, is turning out to be much easier because it's the second time around and follows a similar formula. 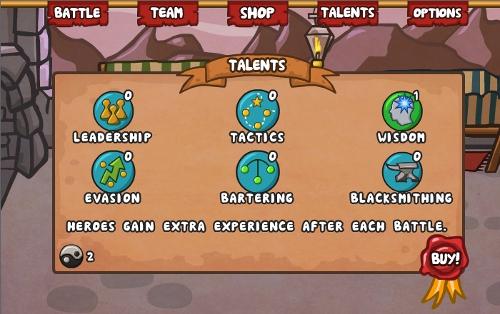 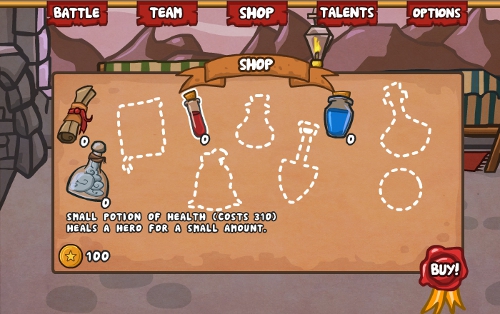 As you can see, there are six different talents that the player can take advantage of (tokens are earned by finishing battles). Money can be earned to buy items in the shop and revive fallen warriors. Items are unlocked over time so the player is not bombarded by too much content up front. None of this is final, but should serve as an indication of how this project is turning out.
Posted by Elliot at Wednesday, November 02, 2011 No comments: