After long and careful consideration, I have resigned from my position as a graphics programmer for Firaxis Games and go independent. This is actually not an uncommon occurrence in this industry. Independent game development for mobile devices and even major consoles is hot. It is a golden age. It is easier than ever to distribute games made in a bedroom to millions of players, and although the market may seem saturated, quality matters more than ever.

So what actually triggered my decision to go indie? I could write pages about it. In a way, everything just fell into place... To start things off, I am very well off financially and my cost of living has been reduced to almost nothing. I prefer smaller projects, and I cherish the freedom to work whenever and wherever I please. The success of my first game pushed me over the edge.

My short term plan is to develop Flash games in 2-8 week development cycles and collect sponsorship and ad revenue. My long term plan is to invest in the successful games by developing a sequel for multiple platforms. Rinse and repeat.
Posted by Elliot at Sunday, April 24, 2011 No comments:

By popular demand I added some more challenging levels by introducing a new cursor potion. Although the game was already licensed, it got front page of both Kongregate and Newgrounds so that compelled me to continue supporting it. 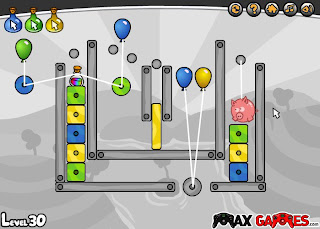 What to do now?

Pigs Can Fly is a successful game, but not quite a hit. The reason being it is a puzzle game and lacks challenge, scoreboards, more levels, etc. Players say it is too easy or too hard, so there needs to be more variety in level design.

There is a small demand for the game on the iPhone, but I will not simply port it over so suddenly. I want to pursue at least one other game idea I have so I can grow as an artist, and then do a proper sequel with more game mechanics and a level editor when the time is right. Plus, the game is sponsored and I want the sequel to be independent, with maybe some non-exclusive licenses sold on the side.

Interestingly, the most time consuming part of making this game were the levels themselves. Looking back they are pretty trivial, but man, it can take a long time to come up with 25 of them. I did it all of them through Adobe Flash CS5 and exported each as a swc, so my tiny engine can parse the names of the movie clips and handle them systematically. The small circles are anchor points for creating joints that I hard code for each level with some utility functions. 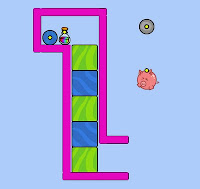 I did not come up with the idea of Pigs Can Fly until well after the prototype, which, yuck, looked like this:

And there was a button to reset the level and create another cursor for recording (allowing hundreds of cursors), but players would cheat by trying to do everything with just one cursor. I needed a round fat animal to be the circle so I chose a pig. I needed to limit the cursors so I made them color coded. The rest is history.

I'm thinking my next game will include vehicle physics in some way. I've improved my skill in taking a photograph and turning it into a cartoon version, so I'm thinking I could really knock out a dozen of them at least.

And sometimes I do main menus while listening to music to come up with ideas. Maybe this could be for a dungeon crawler or defense game featuring zombies and skeletons?

I have released my first Flash game called Pigs Can Fly, sponsored by MaxGames.com!

It has 25 levels and so far I am receiving some very good statistics on opening day (I use playtomic.com). It has not even been 24 hours and already a quarter million pigs have been given wings. Better yet, the average play time is 13 minutes which is a LONG time for a Flash game!

Here are some sites that have hosted the game...

And then it spread to these sites...

And the ratings are very positive, above 80% from what I have seen. It's a great feeling!
Posted by Elliot at Saturday, April 09, 2011 No comments: