Punk Bitches vs the Army of the Undead

"What do we do now?" Those words appeared ever so slowly on the Global Game Jam theme announcement video. A group of about 40 of us at Philly Game Forge stood there eagerly absorbing each passing word that showed up on the giant projector screen. Tens of thousands around the world read it too. What do we really do now?

Well, it helped to work with someone with a similar interest in character driven games and Flash animation. One of my teammates @NG_Tyler and I agreed to borrow most of the mechanics from a particular game, adding our own touch. The characters are band members of a punk rock band battling the undead.. because why the f not? 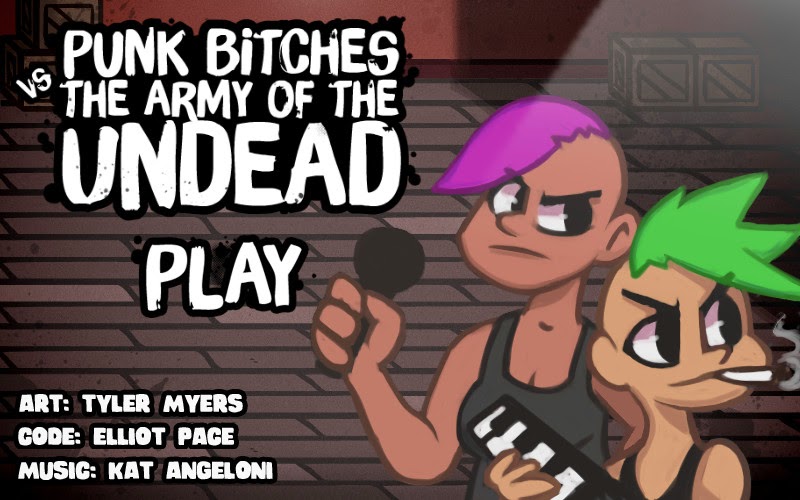 We agreed not to use a common theme for the main characters (obviously). This kind of sub theme is what helps us to stand out. While brainstorming, I recalled scenes of the L7 female punk rock band featured in the movie Serial Mom.

@dlootie supplied audio which breathed a lot of life into the game. 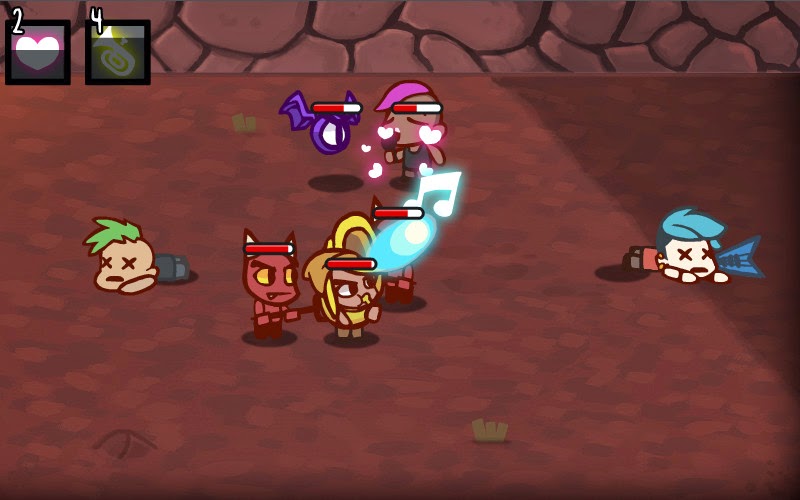 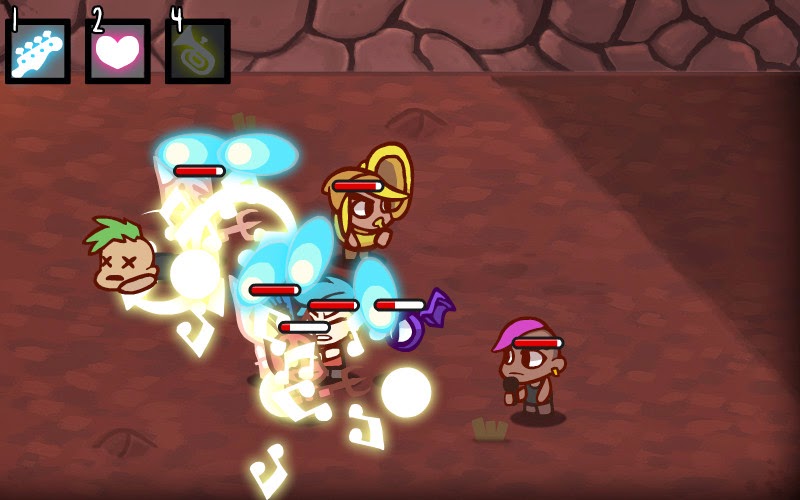 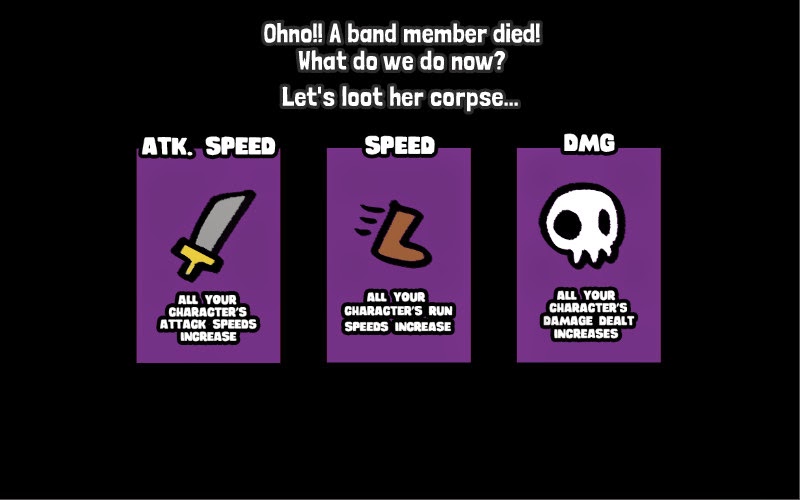 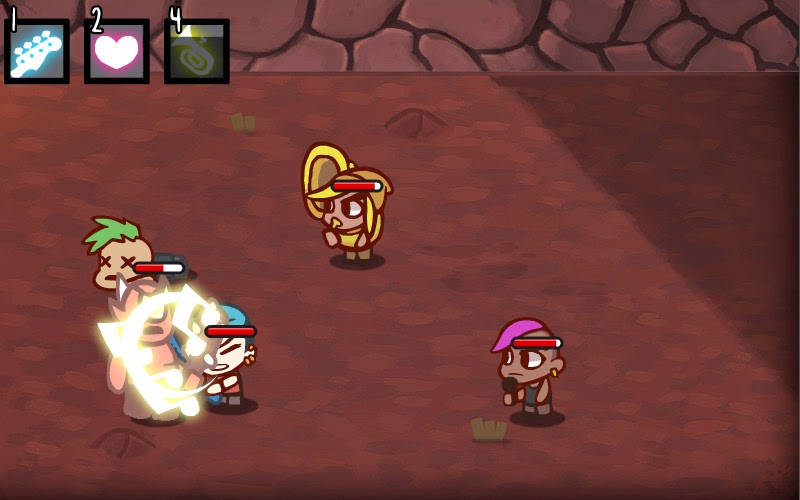 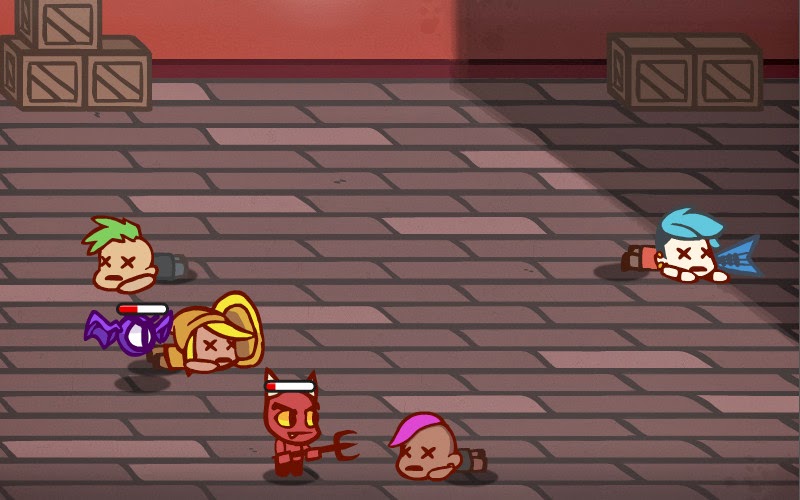 Basically you control up to four characters. The singer heals, the guitarist and keyboardist fight close ranged, and the tuba player bellows notes from a distance.

NG_Tyler did all the art, and I wrote all the code. I gain a lot of enjoyment programming small games like these. In a matter of minutes, a feature can be added and tested. My fingers flew on my keyboard as Pandora blasted through my earphones.

The actual site in downtown Philly felt very welcoming and comfortable, like a giant loft apartment decorated with modern art and relics from the gaming world. The nearby European Republic has wraps from out of this world and the best fries ever.

The experience I got out of this is the greater realization that in large projects I tend to be too focused on getting everything correct, clean, and well thought out; it leads to conservative design and less spontaneity. I need be a bit more reckless and daring.

Source code and game page.
Posted by Elliot at Monday, January 26, 2015 No comments:

It has been a while since my previous blog entry! I am alive and well, still working on a "Zombie Situation 2" for the Apple and Google app stores. It is fairly art and content heavy. Over the past few months I continued to think:

I am targeting the 14th of February as a milestone to reach playable alpha status, then 21st of March for the nearly finished beta status that includes audio and all functionality.

"Progression" has continued to be a recurring signature style in the design of my games. Many of my games are fairly easy and simple to play, but are supported through a large array of features, such as weapons, gear, special abilities, and avatars. The player earns these over time, so the sense of progression contributes to the fun factor of the game. Unfortunately with large volume of features, it can be a fairly time consuming task. Eventually I get to the stage where sections of the game can be locked down and finalized, leaving just bugs to sweep up.

Anyways, I am packing my bags to go take a somewhat spontaneous trip to Philly for Global Game Jam 2015! The past couple years I had visited NYC for this event. Either way, I'm eager. I missed out on three of the past four Ludum Dare jams, so hopefully something great and innovative will come out of this one.
Posted by Elliot at Friday, January 23, 2015 No comments: