With thousands of game puzzles, I needed a way to present them. Predetermined with full map illustrations like board games came to mind. After all, I had already purchased vertical progress maps that could have been applied. The cartoon art interface pack came with a map too. I chose just to keep things simple and randomize it without visual maps. 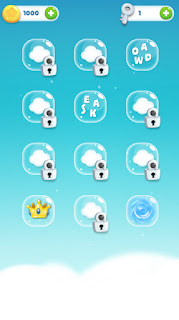 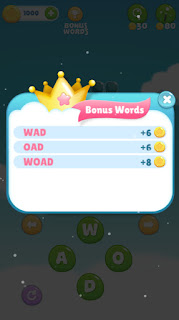 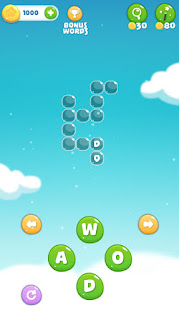 Keys are given over time, used to unlock options to clear puzzles and collect items that are redeemed for coins. Coins are used to provide hints to help solve the puzzles. There is a fairly high demand for word games and I want this one to be polished and straight forward.

Coins and keys can be purchased, or given if a reward video is watched. I have observed gamers across southeast Asia, and I can assure you many are willing to watch a 30 second video rather than fork over hard earned cash. Many lack a credit card anyways, so overall ads are still king.

I use a dictionary of common words to generate the puzzles, and a much larger list of words stored in a HashSet to reward as bonuses. Notice that "woad" registered as a bonus word, which is a yellow-flowered European plant of the cabbage family. Few people would know that, so it would never be a required word in the puzzle.
Posted by Elliot at Sunday, February 03, 2019 No comments: