The numbers take into consideration the targeted language. In English we use commas to separate thousands and a period for decimal places. Some languages interchange these two symbols. Other languages use apostrophes too. This was fairly trivial to handle because C# allows this change through the CultureInfo class.


A feature like ancient artifacts and language localization are two critical features missing in Zombie Guard. That app will get some updates soon, after I am finished with this one.

I started debugging the app through my Android phone and the SDK. It is really motivating to hold the game in my hand, rather than poke at my laptop screen within the Unity application.


I feel like I've doubled my skills with Unity during this month in Canggu. After I reach beta, I want to invest some time researching some open source Unity games and script packages in the asset store. There are so many little tricks in this engine and C# that I have accrued from here and there.
Posted by Elliot at Thursday, June 21, 2018 1 comment: 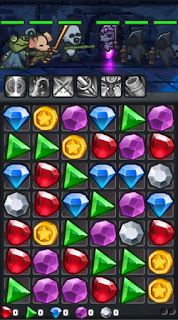 Yellow topaz gems used to represent pure physical damage. It never looked right and would clash with the orange coins. I replaced them with white gems, which makes a lot more sense given the purity of physical damage.
Posted by Elliot at Tuesday, June 12, 2018 No comments: