Pigs Will Fly is released!

I am pleased to announce that Pigs Will Fly is now available in three app stores! 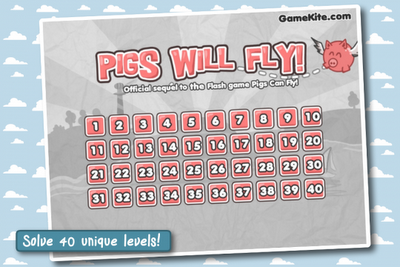 The game runs in HD if you run the app on a iPad, Kindle Fire, Galaxy Tab, or Nook Color. Below is one of the walk-through videos for the Flash version, which will be available on the web in a week or two.

I've drawn some of the art for the new zombie game: 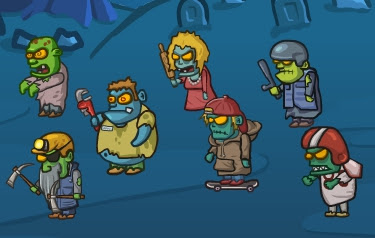 Each zombie has a special ability or purpose, and they are introduced as the play progresses through the game.
Here is an early concept for the weapon upgrade menu which contains repeated placeholder weapons. I decided to make each upgrade cost only one token (dollar symbol), which rids the need to cram in prices had I gone with a more traditional currency system. 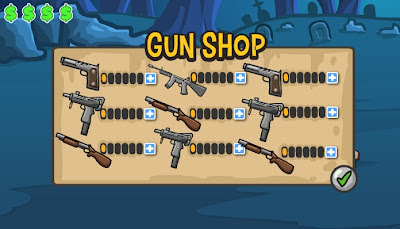 It's that time again to begin the next project! I do have a fixed-shooter bunny project on hold and I plan to keep it that way. I could go on with the reasons, but it boils down to me just wanting to salvage the art and scrap the severely flawed 3-4 designs that came about.
I came back to it after a couple months; it was easier to see its drastic flaws so I have no doubts of this decision. The most critical mistakes I made were insufficient prototyping, ignoring early signs of lackluster gameplay, and changing the genre too many times. 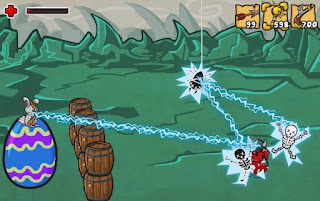 With that said, I do have plans of what I would rather create in the next few months. It will more than likely involve zombies, lots of weapons, and fast action gameplay accompanied with simple controls. I have experimented with different control inputs for my handheld devices to ensure I have one that just works well. My games tend not to feature strong story, nor bring out strong emotions in a player, so I need to focus on the fun factor and adjusting the controls so it feels right.
Here is my first attempt for the Kindle Fire. As you can see, I am attempting to make a defense game where the player is barricaded by a wall and must shoot down enemies as they run from the right side of the screen. 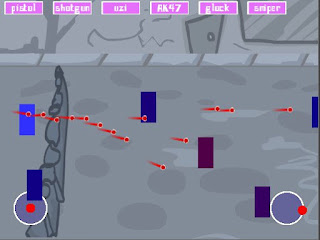 The controls function similarly to Geometry Wars, where the left analog "stick" is movement, and the right controls the aim, but it just did not work as well as I hoped. It felt a bit clumsy, especially since the player is restricted to part of the left side of the screen.
My second attempt works much better. It restricts the player to vertical movement and allows easy shooting with three buttons that always fire to the right. This makes movement and positioning critical (plus, speed upgrades become more important) and allows for more tactics based on enemy distance (e.g. shotguns for close range, rifle for long distance). 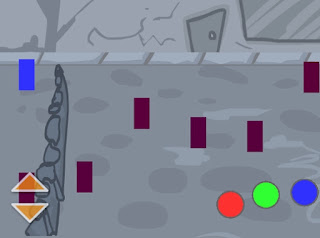 All this may seem trivial, but it is these things I want to address before moving forward. I also did some experiments to ensure the game will play similarly across all devices that vary in aspect ratio and resolution. The easiest thing is to force a standard one, and draw black borders over unused space. Pigs Will Fly supported 480x320 (iPhone, Android phones) and 1024x768 (iPad's resolution), but Kindle Fire and NOOK have larger aspect ratios so a lot of the screen went unused
I will be supporting 700x400 for the web version, 1024x600 for most/all Android tablets, 1024x768 for iPad, and 480x320 for everything else. Backgrounds will be cropped horizontally if necessary, and the time it takes an enemy to run across the screen will be consistent across all versions. Interestingly, the game may feel harder on the widescreen displays because enemies will appear to be covering distance more quickly relative to the background, but it's just an illusion.
I'll be traveling along the east coast to see family for the next 10 days, so I'll be doing only a modest amount of development for the next two weeks using my laptop. I plan to read "The Art of Game Design" by Jesse Schell and listen to some Indie Game Podcasts on the plane. Also I'll be passing through Asheville, coincidentally the exact evening Indie Game: The Movie will be playing so I have a ticket ready for that.
Lastly, on a random note, here is something I drew for fun... 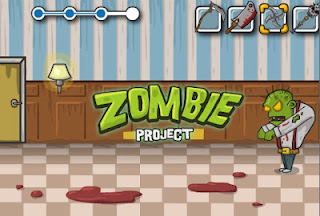 I took that zombie to stress test how many could be drawn and animated on the Kindle Fire and iPad using six-piece paper doll animation.. the number seems quite good.
Posted by Elliot at Tuesday, March 06, 2012 No comments:

Pigs Will Fly has been submitted to the app stores! Hopefully on March 17, the Apple App Store, the Android Market, and the Amazon Appstore will all have the game available. I already submitted the binaries and chose a release date later in the month, just in case something unexpected occurs.

(one of the promo screenshots to be shown in the app stores)
The walkthrough video (linked in the game) shows how to beat every level in case the player gets stuck. It is continuous footage with flawless execution, yet is a whopping 36 minutes long! Therefore the average player probably will need to spend at least 1-2 hours to beat all 40 levels. Not bad for a dollar app.
Posted by Elliot at Thursday, March 01, 2012 No comments: