Three new heroes have been drawn and animated. These as an addition to the other three ought to be enough for now.

Not shown are some of the disastrous sketches. Apparently drawing a polar bear is really challenging, so instead the cold based hero is a penguin akin to a Spartan.
Posted by Elliot at Sunday, August 26, 2018 1 comment:

I'm glad to say the big update for Zombie Guard was a success. The rating has increased and there were only minor issues that have already been resolved.


This started as a minor update, and ended with more features than anticipated. I began to see more possibilities and just went with it.

Stability also has improved. Crashes have reduced 20% on graphics and input systems. Of course all I had to do was download the latest version of the Corona engine.
Posted by Elliot at Monday, August 20, 2018 No comments:

Given the five types of elements, I needed an animal specialized in fire. A mythological phoenix came to mind, but seemed too tricky to draw and animate as a chibi (mini) character. So, here is a Fire.. Fox. Partially designed as the magician class of Everquest without any summoning abilities. This creature can hurl a powerful fireball, enchant weapons to deal fire damage, and give a fire shield for armor and returned damage when struck. 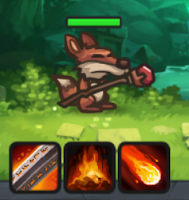 The staff through a custom "ModelAttachment" script is not being placed correctly. The weapon should be placed behind the arm, as specified in the draw order of Spine. It works correctly for the other heroes. One of many unforeseen problems to address.
Posted by Elliot at Monday, August 20, 2018 No comments:

In order to break up the monotony of battles, there will be mini-game challenges to gather resources. In this one called Treasure Hunt, after a match is made, one cell (typically the latest one moved) of a contiguous block will be upgraded to the next type and the rest are removed. A match can be made mid-air with that upgraded cell, before it even falls to the bottom. There are a limited number of turns, and a match-4 or greater awards one extra turn.

It makes a lot of sense when played. There are many strategies too.

I had to rewrite the algorithm a few times until I got it completely correct. I use basic AI to play the game for me in fast-forward mode. There was a rare bug I fixed where cells would annoyingly overlap one another.

It is about time. A much needed update for Zombie Guard is on the way! Three new weapons, a new level, and multiple competitive survival modes.

Working on this update is a delicate task. I must be very careful not to make mistakes that could destroy the saved progress of many of the current players. I plan to serve the update to a small percentage of users, gradually increased to 100% if there are no reported issues.

But fortunately, this update does fix a notorious bug that has existed from the very beginning. Thanks to a fan, I was able to reproduce it. It turns out equipping landmines as the primary weapon would freeze the game going into any mission.

In the future I am a bit tempted to make a Zombie Guard 2, in Unity, with much better special effects, audio, music, and features. Zombie Guard is made in Corona, which these days is a less supported engine that I do not recommend.
Posted by Elliot at Sunday, August 05, 2018 No comments: