What is the most interesting observation I have noticed when it comes to game development over the years? Almost everything needs to be reiterated from art, to programming, to design. Consequently, with design, the game has also been reduced and rid of unnecessary bloat. I am still targeting the more casual audience, especially on iOS devices, so the game should be simple and easy to understand.

With that said, I returned from a brief vacation and experienced the game with fresh eyes. And with the help of playtesters, I have decided to make drastic changes to the heroes. At this point, I am satisfied with the fire, cold, physical, and poison elements, but each hero does not have enough utility. Worse, upgrades are independent from one another. Sure you can upgrade an ice mage to slow enemies, but it gets progressively more expensive and he will be doing as little damage as a freshly hired one.

Therefore, each hero's level will be simplified to have predetermined benefits, and most of the heroes will be changed in some way. It will be less about damage, and more about utility.

The first build on the iPad!

Here is a photo of the latest tower-defense game on my iPad! I originally planned to have it in the market by now, but the game was just was not ready for even external play-testing. I ended up changing some core features in order to simplify the game. Perhaps I no longer feel the need to rush things, because I now feel the warmth of the light at the end of the tunnel.

With that said, I'm at the point where I can now concentrate on other things. The past couple days were spent packaging site-locked licenses for Defend Your Nuts, researching for the next project, and just taking it easy. I also took a day trip to New York with my roommate to pick up some high quality spices for cooking. We also visited Korea Town way out in Flushing, Queens to shop at the local bakeries and high end tea shops. 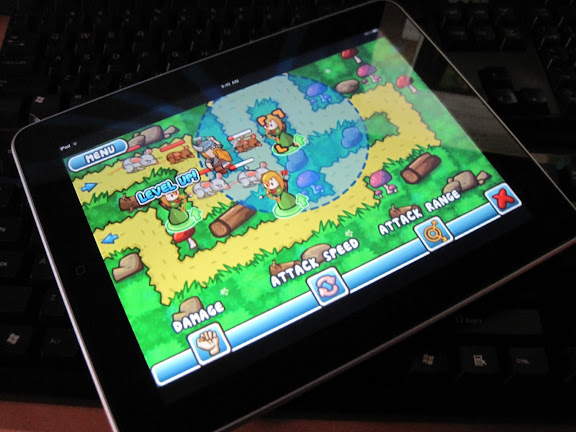 Yes, I do have two keyboards - one for my primary PC and one for my Mac Mini that I just use for compiling iOS projects. I recently picked up a "silent" mechanical Das Keyboard and I love it. I find myself typing up to 50% faster with no fatigue, because the keys have been specially engineered to have calibrated pressure sensitivity. At first I was not blown away, but after going back to a cookie-cutter Dell keyboard and its mushy feel, it just can't compare.

But back to the topic of the project. I was really amazed at how simple it was to build the app for the iPad. Corona does a fantastic job at taking care of all the annoying bits that go into the process. Have you ever made an iOS game in Xcode with no engine? I have.. and it was an incredibly miserable experience that turned me away from mobile development for a long while. These days I would rather just license great technology that takes advantage of very high level languages.

Though, typical of game development for something to take longer than expected. I use Git for source control, but out of the box the software does not handle binary files well. My project's entire depot was a reasonable 2gb, but it took about three hours just to "pull" the project onto the Mac Mini. Despite this, I still love Git for small projects due to its simplicity and power. I'm definitely going to continue to use it.

And the winner is...

I'm proud to announce that Defend Your Nuts is primarily sponsored by Armor Games!

It has been less than an hour, but the game is doing well and the feedback is mostly positive, which is great news! So, congratulations to Armor Games! I'd like to thank all the beta testers who provided feedback on all aspects of the game.