Pigs Will Fly for iOS and Android

Pigs Will Fly has been fully ported to support iOS and Android devices using Corona!
In programming terms, this means I copied and pasted Flash ActionScript code and revised it into Lua, rewriting some parts completely where necessary. A function was written to iterate through each level and dump all the body and joint data into a giant Lua-formatted table. The only challenge was getting the physics to behave identically. 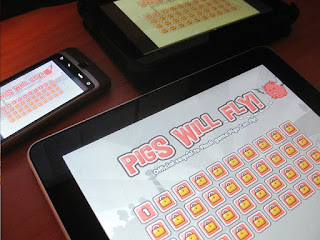 In the photo you can see the game running on an iPad, Android phone, and a Kindle Fire! The game automatically uses HD graphics settings for tablets, and standard resolution otherwise. I prefer to use letterbox scaling to maximize the screen space and maintain aspect ratios across all devices. The Kindle Fire has the strangest aspect ratio, so black borders are automatically drawn to cover up the unused space. Some would say that it's ugly, but I don't mind.
Pigs Will Fly will be released for the Apple App Store, Android Market, Amazon App Store, and probably the Nook App Store as well. A very tentative release date is March 1st.
The free-to-play Flash web version will be released at my own discretion. To be honest, currently there are no limitations on the web version, and on the contrary, is easier to play compared to handheld devices! However, it will not be primarily/exclusively sponsored, so the only advertisements will be buttons to purchase or gift the handheld version.
Posted by Elliot at Thursday, February 23, 2012 No comments:

The "Pigs Can Fly" sequel is now in beta! It is going to be titled "Pigs Will Fly" to avoid infringing on other IPs on the app store. 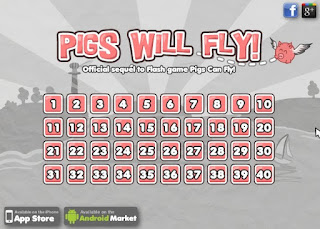 As you can see, I am reusing a lot of the original art assets like the backgrounds which are now overlaid with a placeholder crumpled paper texture (to be replaced with my own). I decided just to include 40 levels in the viral Flash version, and the dollar mobile app will include free updates. I am working on the port right now and it should take no more than a week.
It even takes me a while to beat all these levels. It definitely presents more of a challenge compared to the original game released almost one year ago. 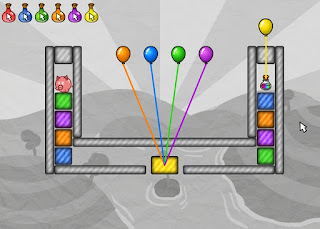 Games under this physics-puzzle genre are unlike any other. Assuming the design is in place, it only takes a couple days to program the features necessary and the level creation phase can be shaped into a realistic schedule. 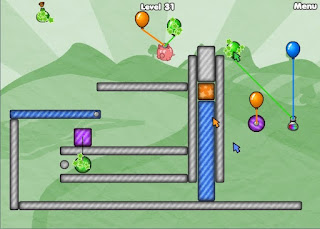 ..It was possible for me to take my laptop to a coffee shop or local park, create a level or two, and then rinse and repeat the next day. Hiring online level designers crossed my mind multiple times, but that idea faded along with the level editor feature built into the game itself. I wanted to keep things simple. All the levels were created in Flash.
On a related note for other developers, the newer versions of FlashDevelop include a feature to create a "Flash IDE project". Now rather than wasting time exporting and importing swf and swc files from Adobe Flash to FlashDevelop, you can keep everything in single fla file and use FlashDevelop as a text editor and debugger. It works great for a single developer, but maybe not so well for a team of even two or more developers.
The feature uses Adobe Flash to compile and launch the game, while adhering to breakpoints and such in FlashDevelop. It brings the two programs together. Sure you could just use write and edit code in Adobe Flash, but for me it tends to have huge latency when it comes to just typing and scrolling. Yuck. You can still use the "Embed" keyword for external files like audio, but those files must be added to the library.
Pigs Will Fly currently is available on FlashGameLicense.com for previewing purposes. Feedback is welcome. You may need an account to view it.
Posted by Elliot at Wednesday, February 01, 2012 2 comments: