After discarding a few prototypes, I settled on an action roguelike game with procedurally generated levels. The foundation for the tech has been easier than I feared.

I arranged blue squares that represent rooms. The actual rooms, consisting of many brown cells and optional side entrances in blue (depending on the existence of an adjacent room), are authored and randomly chosen. Pieced together like a puzzle. Orientation of the entire level and each room is random. There are special rooms for hallways and in the future, corners.

It only takes a handful of rooms and arrangements to reach millions of uniquely generated worlds.


There is no limit to the size of a level. 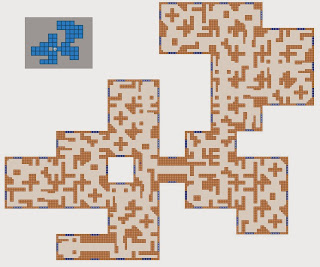 Things will get even more interesting, when I sprinkle in spawn locations for treasures, enemies, and traps.
Posted by Elliot at Wednesday, December 11, 2013