I have been wanting to give my game a bit more personality, so I have been focusing on four characters that offer options and upgrades. For example, approaching the bard exposes his speech bubble to toggle music and he animates accordingly. This should intuitively lay out all the options for the player to explore, rather than offering some gargantuan menu with text everywhere. 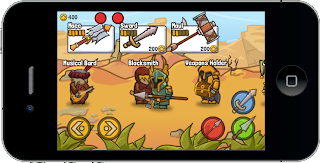 I was very impressed by the performance on my Android device, where dozens of characters were fully animated and moving around with no apparent loss of frame rate. It is as optimized as it ever will be. Plus it will have an expected release size of only 15mb.

It looks like it is going to be just design and programming from here on out. All the weapons, backgrounds, and animations are finished.
Posted by Elliot at Friday, March 29, 2013

It should be finished by the end of this month, so released sometime afterwards.