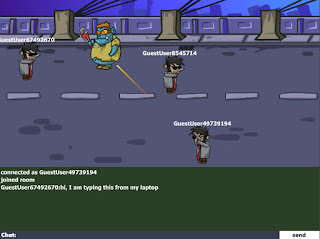 In this prototype I borrowed art assets from Zombie Situation, and hooked up basic WASD movement with mouse controlled shooting. This screenshot was taken with me connected to the game on three computers simultaneously. It basically has the framework I want, where players send and receive updates at 10hz while interpolating frames in between. Best of all, it works!!
Posted by Elliot at Monday, December 10, 2012