I decided to make some substantial changes!! The game is now grid-based and no longer features the ridiculous pods that limit where heroes can be created. Additionally, all of the interface design has been redone to make better use of the limited screen real estate! Although this entire overhaul took a couple days, it will actually make the rest of the project easier because levels will be easier to create... I'm going to need about 20 of them, so it would be great to make them all in a single day! 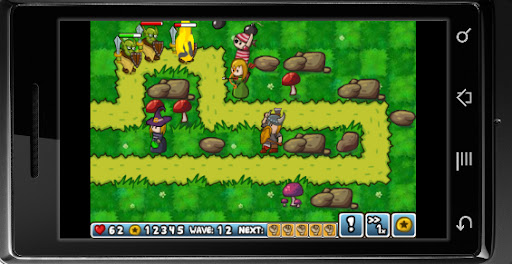 The rocks and mushrooms (and other future obstacles) can be paved away at the cost of gold to allow heroes to be purchased on those squares. Specifically, the dwarf will have only a 3x3 grid-cell attack radius, so it would be advantageous to remove that small rock in the corner of the path on the right side of the screen.

Below are the level design concepts from prototype to final. The final design borrows art inspiration from Plants vs Zombies, Bloom Defender, and Mining Truck...

Conclusion: the smooth windy roads were a failure for many reasons so it had to be fixed. Today marks the end of four weeks of development, so there are two more to go until beta. It's going to be a very busy couple weeks!!
Posted by Elliot at Friday, July 15, 2011