A bit more art and adjustments to the screen effects.

I expected myself to just use most of the art that I already licensed, but lately I have been satisfied with some of my own creations. I have continued the same style, but changed my approach a bit in Clip Studio Paint.

It is a simple look, but that also is the challenge. Everything is reduced to a minimal number of blobs and lines. Just the slightest change in a curve will change the shape and make something look very different. The outlines are really thick too, so shapes can't be too narrow.

I'm just creating random objects freely, without really a firm objective in mind. Some of the pieces (especially the kitchen) will be redone.

I'd like to create a few more objects, and then put together a limited demo with just one or two zombies and a handful of weapons.
Posted by Elliot at Friday, September 27, 2019 No comments:

A simple background, with different camera filters applied. I tend to prefer the filters, to prevent the game from looking too much like a Flash game that uses vector art. I tend to like the imperfections and stylized look. Plus I get to spend less effort with all the lines and shading for the scene objects. It is very difficult to paint imperfections on the floor without making the game look too busy and cluttered.


That kitchen consists of individual pieces, which can all be rearranged. This got me considering having semi-procedurally generated backgrounds, with many areas to explore. Still, I must remind myself to stay true to my objective of just creating an arcade style shooter that focuses on the weapons and action.

There could be ammo and money inside objects, like looting areas in the Fallout series and The Last Stand: Union City:

Even spare parts to craft and augment guns? Funny objects to use as bullets? It is a zombie game, so it should not take itself too seriously. I want to be playful and less restrictive with design decisions.
Posted by Elliot at Tuesday, September 24, 2019 No comments:

Getting a sense of scale

The first step for creating Zombie Guard 2 is to establish the proportion of objects to each other. I created my first hipster/biker guy, as one of the many characters to be featured in the game. Then, I used some placeholder background just for getting a sense of scale. I do not plan to create much of the art until later, but I still prefer to at least establish the look.

This seems about right. I will now increase the thickness of the ink outlines of the character.

In Zombie Situation, I neglected the proportions. There was also a lot of wasted space, so I need to consider props and objects to make these areas more interesting.

Definitely characters will be able to move around and explore small areas. Zombie Guard 2 will be action game, with plenty of weapons made possible with a powerful projectile system and special effects.
Posted by Elliot at Monday, September 23, 2019 No comments:

The updated loading screen for Gem Heroes, and new gameplay video to be shown in the listing. 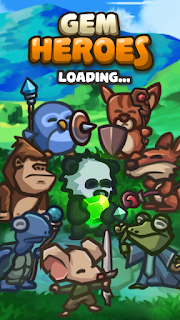 Along with a bunch of bug fixes and adjustments.
Posted by Elliot at Sunday, September 22, 2019 No comments:

I was wondering if I could combine Oregon Trail with zombies in an action oriented RPG with some comical storyline. Take Zombie Guard, and place characters on a moving vehicle, on their way to some place during the apocalypse while blasting away. It has multiplayer potential.

Some inspiration for mechanics came from Swamp Attack, zOMGies 2, and theme ideas came from movies like Zombieland and others.

But this essentially becomes two games in one - action, and strategic resource management. I would have to please both crowds. Players who want action don't want to conserve ammo, and players who want to manage resources may not be fond of the action.

I created a prototype for this anyways. But I was not really feeling it. These ideas can work, but it does not suit me well.

I will at least keep the projectile system, which utilizes many powerful Unity components. I'm having fun extending it with bitwise flags for other behavior like seeking, piercing, bouncing, splitting, etc. So, now I consider just creating an arcade shooter, focusing heavily on projectiles and perhaps some gun crafting system for ridiculous weapons.
Posted by Elliot at Thursday, September 19, 2019 No comments:

Some of these interface packs work well with screen effects:

It looks even better live because of the animations. Combined with sci-fi audio clips and deep atmospheric sounds, the "mood" of the game has been established quickly. Eventually I could add in a parallax atmospheric background of earth too.
Posted by Elliot at Tuesday, September 10, 2019 No comments:

I try to be resourceful. As a solo developer, it is too expensive to draw and program everything. More of my time needs to be dedicated to design which is the most critical part.

I've had a flood of ideas. Wild and crazy ones, including one where you play as the AI for a robotic voice system like Apple's Siri or Amazon's Alexa in a family home in the suburbs. It could play as a time management or puzzle game, or just have an interesting story depending if you cooperate with the "humans".

..But the demand for a sequel to Zombie Guard is high. It would still be hard to create this, as it involves many assets and content. But at least I would not have to iterate nonstop on design, never being fully satisfied to give myself the green light. 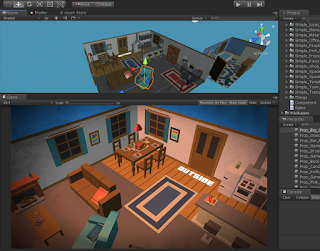 At first I was playing around with some mobile-friendly low-poly models. The idea was to create an escape room game, perhaps like a tower with 101 floors in a strange Myst like atmosphere. Perhaps after a few hours I just wasn't feeling it. I do not have a passion for escape room games, beyond a few I played recently. 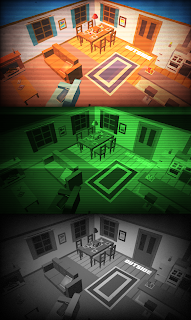 So I attached some of the wonderful screen effects that I have available, just to see possibilities.

I question if a "Zombie Guard 2" could take place in these environments. Or in the least, these environments could be utilized as a replacement for menu screens for options like weapon and character improvements. A safe house could be upgraded, and visually seen in these settings.

Possibly, I may include multiplayer. This was a highly requested feature which despite being a technical challenge, would delight many players and increase the number of downloads through word of mouth.
Posted by Elliot at Sunday, September 08, 2019 No comments:

The new game has been titled "Gem Heroes" and is in closed beta. I will release it to the public after a few more tests and adjustments. 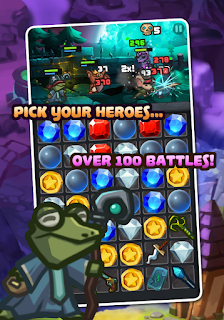 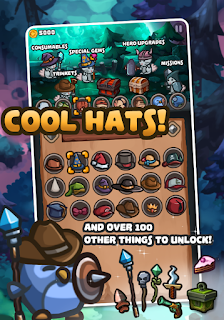 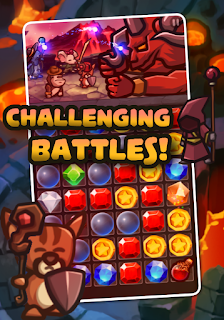