There are only 80 days remaining until I fly out and begin my new life abroad!

I have already watched hours worth of YouTube videos and Netflix specials on Thailand, particularly the Northern city of Chiang Mai, where I will be living as an expat for at least six months. The area just seems so enchanting; there is a strong presence of Theravada Buddhism and prevalence of night markets, street vendors, and modern attractions. Thailand and the general region seems familiar to me.. after all, it should; I spent first and second grade in Myanmar, followed by third, fourth, and fifth in South Korea. Actually, I have lived half my life abroad (military family growing up). The sights and sounds of South East Asia particularly beckons my return.

Chiang Mai is one of the highest ranked destinations for individuals who earn a living through the Internet. It is clean with modern apartments and evidently is not short of restaurants and things to do and see.

Plus, food especially is less expensive in Thailand compared to the US, leaving far more funds to splurge and invest. Recently I went out to have a nice dinner in Baltimore which cost around 30 bucks; I left a customary 15% tip of five dollars. In Chiang Mai, the five dollars gets you the entire damn dinner.

Asian cuisine actually is something I will never get tired of. The contrasting aromas and flavors of Thai cuisine particularly is like a kaleidoscope for the senses. I have my eye on some cooking classes in Chiang Mai, where I would be able to learn the traditional methods. Still, I would never be any match compared to an experienced street vendor.

Khao soi apparently is a popular dish in the region - a Burmese influenced noodle soup typically served with pork and crunchy fried egg noodles on top. I have yet to try this. I plan to forgo airline "food" in anticipation of what awaits.
Posted by Elliot at Sunday, July 16, 2017 4 comments:

I have been experimenting with some newer brushes available for Clip Studio Paint, to create some conceptual illustrations of some design ideas. I've come to really like the look of blue ink and digital watercolor. When placed on a scanned page of grid paper, it can look convincingly "realistic".

I would prefer not to use my usual vector-like art style shown on the right. 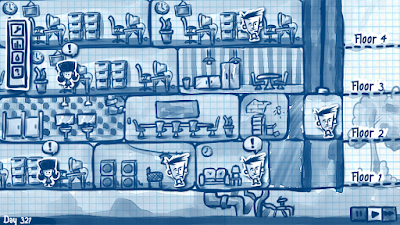 Above is a concept I painted in a few hours, partially inspired by Sim Tower from the 90s. I made things pop with white outlines and air brush, like cutouts of paper shadowing on top. If I were to attempt all this in my vector style with full colors, or even some semi realistic style, then it would probably take days of arduous effort and still I would not be satisfied. Sure, this monochromatic blue style lacks contrast, but it gains contrast when compared side-by-side to the other games in the app stores that have super vibrant colors.
Posted by Elliot at Thursday, July 13, 2017 No comments:

Well, I have dusted off the nearly finished project of Gassy Goat! This is a game that I put off from completing about a year ago. Honestly, I really did not want to finish it a year ago - I was so tired of playtesting it; beating it from start to finish was just arduous. Now after time has passed, I can see it as a newcomer, where some features are better or worse than I recalled. It is bittersweet.


Here is a trailer gameplay video I made last night:

"Hey, this is actually kind of fun" I thought to myself while perpetuating the goat into the air while grappling onto birds and other animals. Likely this game will do quite well for the casual gaming audience. There is very little text so localization into other languages is unnecessary.

In other words, the game is now complete, so that's a bit of weight off my shoulders.
Posted by Elliot at Monday, July 10, 2017 No comments: